Some people will poo poo the whole Myers-Briggs personality type thing. And if this is you, then there’s nothing to see here. Sure, I know that no one fits tidily into just one of 16 different boxes. And it’s never good to completely pigeonhole someone. But for those of us who seek to truly understand the people around us, how to relate to them, and what their motivations are, some amount of categorization is helpful. At least as a starting point.

In high school, we took the Myers-Briggs Type Indicator (MBTI) test a couple of different times, and each time, I got a different result. The one we took was “official” and always asked you to choose between “this” and “that”. Well, almost every choice, for me, was “it depends”. I was “this” in certain situations and “that” in others. So none of my results were terribly accurate. But later I read up on the 16 personality types that M-B breaks people into (sometimes called the Keirsey Character Sorter, or something like that). The topic fascinates me.

Years later, I found a book on the topic with a similar test but in a different format called What Type Am I? Discover Who You Really Are. Instead of choosing between two options, it gave sentences and asked you to rate how well that sentence describes you. This gave many more shades of grey to the results, and showed that you can be strong in more than supposedly “opposite” areas. It wasn’t an all or nothing thing. I highly recommend this book to anyone interested in personality types or even just knowing yourself better. It has gotten heavy use in my house.

My results from the book, time and time again, show that I’m an INFJ. It’s apparently the rarest personality type, ranging from less than 1% of the population to a little over 3%, depending on which source you believe. All four of my letters are very strong. But my J is ridiculously strong. This describes me well, from ChangingMinds.org:

Judgers approach life in a structured way, creating plans and organizing their world to achieve their goals and desired results in a predictable way.

They get their sense of control by taking charge of their environment and making choices early.

They are self-disciplined and decisive, and seek closure in decisions. When they ask for things they are specific and expect others to do as they say. They enjoy being experts.

At work, they decide quickly and clearly and work to get the job done.

Three of the other four letters not in my personality type—E, S, and P—are pretty weak for me. But my T (which is the “opposite” the F in INFJ) is also very strong. Just a tiny bit less strong than the F. So I tend to fit in pretty well in the INTJ camp, too. Logic is my friend.

What does all of this mean? The book explains it all very well, but there are also websites that break down the types. Here’s a decent description of an INFJ from 16 Personalities:

The INFJ personality type is very rare, making up less than one percent of the population, but they nonetheless leave their mark on the world. As Diplomats (NF), they have an inborn sense of idealism and morality, but what sets them apart is the accompanying Judging (J) trait – INFJs are not idle dreamers, but people capable of taking concrete steps to realize their goals and make a lasting positive impact.

Here are some other sites that describe INFJs, among the other types:

Recently, I found someone who makes web comics from the perspective of an INFJ. He goes by INFJoe. Several of his comics really spoke to me and reflected who I am. I have his permission to share a few here, and I link to more of my favorites of his as well. His website is a treasure trove of INFJ-ness, and he’s also on Facebook. 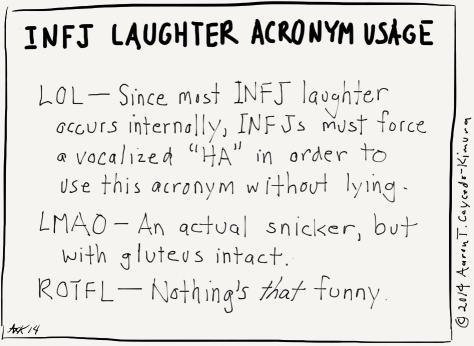 I find many things hilarious, and am regularly quite amused. But actually laughing audibly takes some effort in my regular state of mind. I have to be caught by surprise usually, for something to make me burst out in laughter. Usually I just laugh inside my head. But when something actually does make me laugh out loud, it makes an impression on me. Unless I’m in a silly mood, and then I laugh a lot. I’m full of exceptions and contradictions.

When I need to make a decision, I research the topic to death, keeping all my options open along the way. But once I’ve decided on something, it’s full steam ahead. People should avoid getting in the way. My mind is made up.

I’m not known for my spontaneity. Except under certain conditions. I call it “Planned Spontaneity”. Don’t laugh; it works for me. 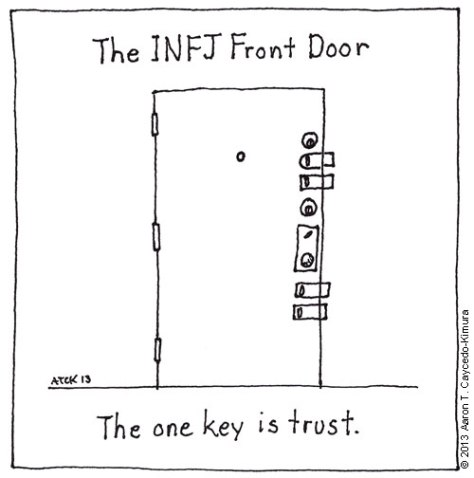 It takes me trusting you for you to be able to get to know me. Like, get to know the real me. There are many different layers that I peel back, the more trusting I am of you and accepting you are of me. The same goes with my house. I don’t have New York City-levels of locks on my front door, but someone coming into my house feels like they are invading my space. Even my closest family and friends give me that feeling. Non-friends visiting are excruciating to me. So realize that if I invite you over, it is because I care enough about you to go through discomfort to spend time with you.

Say a Little Something about Yourself

Speak in front of a group? No thanks. I hate the “go around the circle and introduce yourself” stuff. 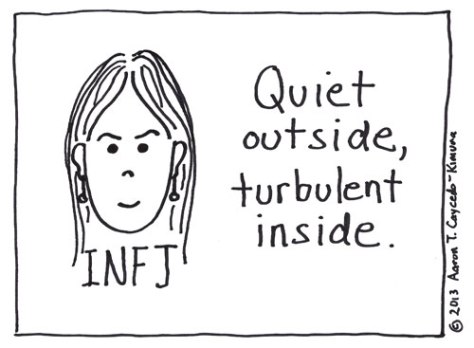 There’s a lot more to me than meets the eye. Sure, I’m nice and pretty wholesome looking. But that’s only part of me. Few see the real me. Fewer see all of me. Pretty much just Rory (well, 99% of me—gotta keep a few things to myself).

Sometimes I want to just say, “Aww, fuck it, who cares,” but I can never seem to do that. Anxiety and empathy keep me emotionally engaged, all… the… time. Unless I have a migraine.

I learn about you as I observe you. Not in a creepy way, just in an, “I’m paying attention,” kind of way. I notice more than you think. Subtle changes in your behavior alert me to changes in your life or your state of mind.

What self-wisdom have you obtained from learning about your personality type?

Previous Post
The Liner Notes of Art History #7: Henri de Toulouse-Lautrec
Next Post
I’ve Got Moxie #7: I Am BASF

One thought on “Olio #7: Myers-Briggs Personality Types and INFJoe”

If the caption says so, it is Copyright: Jenny Bristol.