The Liner Notes of Newspaper History #8: The Genesis of American Newspapers

With the advent of the internet, some may say that traditional newspapers are on the way out. I say they’ll stick around, at least in some form, for a while. But regardless, they’ve had hundreds of years of holding an important place in our nation’s history, conversations, politics, and information. Read on to learn a bit about the history of our nation’s newspapers. 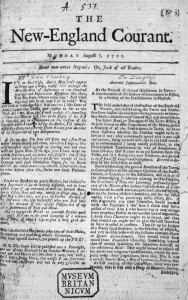 Though there have been other distributed printed material, English-speaking newspapers (or rather, newspapers printed in English for English speakers) really only started in the mid-1600s. And American newspapers didn’t get off the ground until the 1700s. One of the first newspapers, The New England Courant, was begun in 1721 by James Franklin, Benjamin Franklin’s older brother. Benjamin also worked there, first as a typesetter and then as a writer. It was a bit counter-culture in its day, and was “suppressed” in 1726. James Franklin was even once imprisoned after one of Benjamin’s essays caused a stir and James refused to reveal the author’s real name (Benjamin wrote under the pseudonym of Silence Dogood). 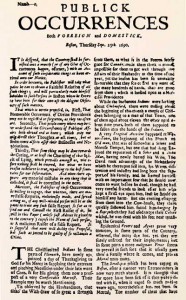 The only issue of the colonies’ first newspaper published in Boston 1690.

The first newspaper in the colonies, however, was Publick Occurrences, published in Boston in 1690. They only got off one issue, though, because it was published without permission and was then suppressed. The publisher was arrested, and all known copies destroyed. Fortunately, not all copies were destroyed, and it was rediscovered in 1845 when a copy was found in the British Library.

The colonial governments weren’t super happy about newspapers, reflected in this text from the Colonial Williamsburg website, history.org:

In seventeenth-century America, colonial governments had rather do without newspapers than brook their annoyance. In 1671, Governor William Berkeley of Virginia wrote: “I thank God, there are no free schools nor printing and I hope we shall not have, these hundred years, for learning has brought disobedience, and heresy, and sects into the world, and printing has divulged them, and libels against the best government. God keep us from both.” As the British government once told the governors of Massachusetts, “Great inconvenience may arise by the liberty of printing.”

Not until 1690 did the first English-American news sheet debut—Boston’s Publick Occurrences Both Forreign and Domestick, published by Benjamin Harris.

Newspapers of the day, back then, would look more like newsletters to us now, rather than resemble our modern newspapers. During colonial days, most were weekly papers, only had four pages, and had most of their ads in the back rather than scattered throughout the pages. Printing was very expensive, so they kept stories as short as possible. Newspapers also contained non-newsy items, such as Benjamin Franklin’s essays, mentioned above. There were also poems and sensational “news” included.

Our founding fathers, unlike the colonial governments, were big fans of newspapers. Not a big surprise there.

Were it left to me to decide whether we should have a government without newspapers, or newspapers without a government, I should not hesitate a moment to prefer the latter. —Thomas Jefferson, 1787.

For my part I entertain a high idea of the utility of periodical publications; insomuch as I could heartily desire, copies of … magazines, as well as common Gazettes, might be spread through every city, town, and village in the United States. I consider such vehicles of knowledge more happily calculated than any other to preserve the liberty, stimulate the industry, and ameliorate the morals of a free and enlightened people. —George Washington, 1788.

The 1700s were a big century for the establishment of newspapers, however. Early in the century, papers appeared in Boston, Philadelphia, and New York. By the time the Revolutionary War started, there were a couple dozen papers, scattered all over the land. By the end of the war, there were 43 papers in print. I guess people started having a lot more to say while the country was at war. Imagine that. It seems that those who were in favor of the revolution used newspapers to influence public opinion through the use of propaganda.

These days, newspapers may be decreasing in number and circulation, but most are taking to the internet to increase their readership and their options. Many people prefer this kind of up-to-the-minute reporting, instead of reading yesterday’s news today. 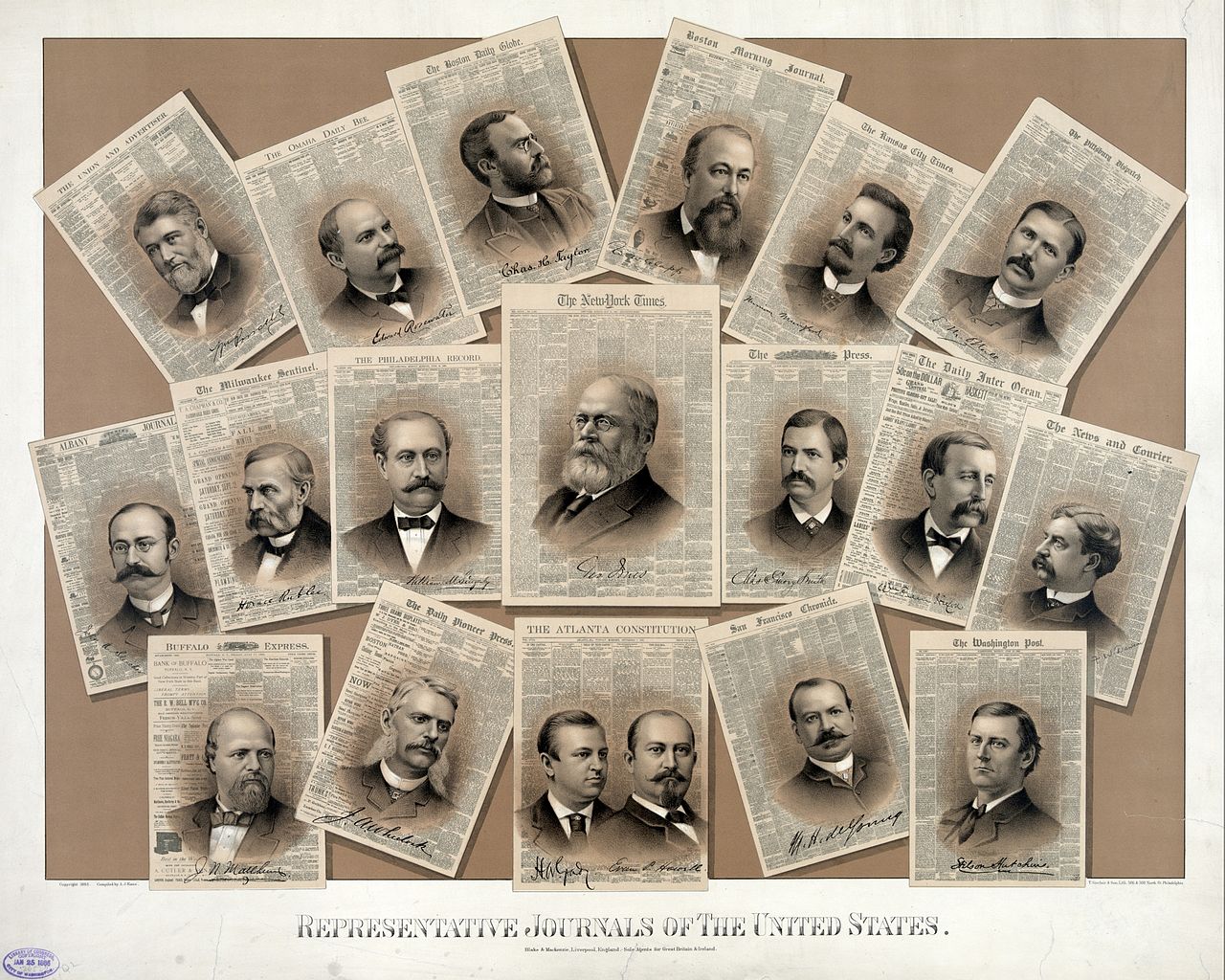 By the late 1800s, newspapers abounded. Here are some popular ones and the people who ran them. Image: Public Domain