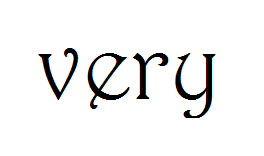 The longer I looked at this word, the less it looked like a word. Image: Jenny Bristol

When you write for a living, you find yourself falling into ruts, using the same words over and over, stringing the same phrases together in different ways to say different kinds of things. I’m no different. (And, apparently, I use the word “different” far too often.) But there are some words that we should all try to avoid using altogether.

“Great,” “good,” and “very” are three important examples. They don’t convey a picture. They don’t give you additional information. They are quite bland, and drag the quality of your writing down. How do you avoid these? Just write as you would normally write, using the words that come out of your brain. I try my best to not edit as I write, because it’s easier to get it all out on the page, and then I go back and edit later.

But once you’re in the editing stage (and everyone should always have an editing stage, whether it is in a novel, a blog post, a Facebook update, a tweet, or even (especially?) a text), take out the useless words, such as “great,” “good,” and “very,” and improve them. Instead of saying that the day is, “very hot” say it is, “sweltering.” Instead of telling someone, “your hair looks great,” say, “your hair looks smashing.”

The English language has, possibly, over a million words in it. Why do we always use the same few thousand? When you are going back and editing your text, take out the fairly non-descriptive words and add in words that evoke images, emotions, or memories. Use a thesaurus. There’s probably one on your phone. I’m sure I should listen to my own advice here.

Someone described the purpose of first drafts once. They said that it’s like shoveling the sand into the sandbox so that you can form it into something else later. The first draft is the shoveling. The editing and revising are the shaping. Many people forget all but the shoveling.

Writers Write, a blog in South Africa, has put together a handy chart for ideas when trying to avoid the word, “very.” Check it out. And use that thesaurus. You might bring some intriguing words back into use, such as “thrice,” which I try to use frequently, and “weesquashing.”