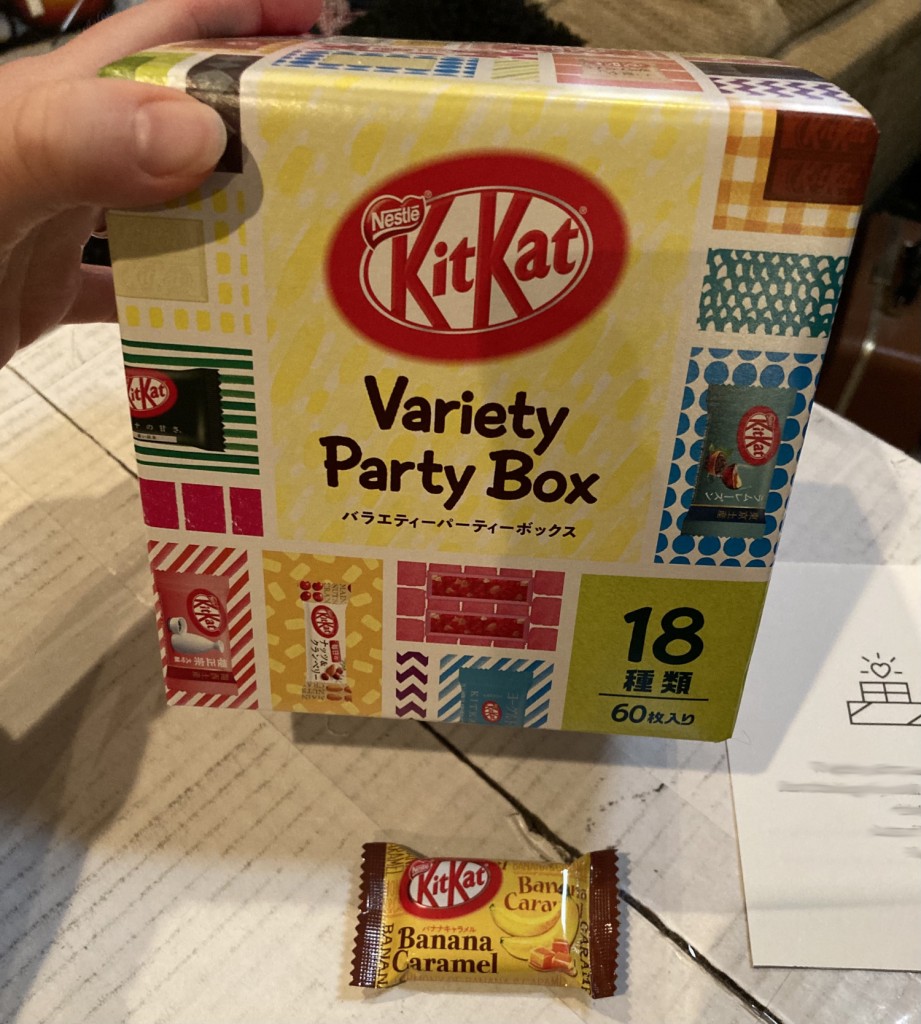 A few weeks ago, a friend of mine posted about Japanese KitKats and the different flavors there were. I drooled over the prospect of trying more flavors than the very few that the grocery store would sometimes offer, past the regular flavor. See, KitKats are one of my favorite candy bars. And, because our friend is very nice and seems to like us and also loves adventure, even vicarious adventure, he had a box sent to us. I promised we would be all scientific about it and have all four of us weigh in on each flavor. Spreadsheet making ensued, and we four tried all 18 flavors across four sittings.

For organization, we grouped the flavors as well as we could, putting all the sake flavors in one sitting for comparison sake (ha ha), and some wrappers that had similar styles grouped together. My Google Translate app, even the photo aspect of it, was very little help in figuring out what the flavors were for packages that had no English on them. Most of them translated into strange random words that had nothing to do with flavor or food (“toilet head”?). Some packages had photos that helped us group or identify the flavors. But mostly it was a real mystery.

Since the box had 60 pieces, not every flavor had four packages, so we had to divide some of them up creatively. One flavor only had just one small package, so we each only got a nibble. But for the rest of them we got sufficient amounts to get a feel for the flavor. It worked out in the end.

My kids (daughter, age 19, and son, age 16) were interested in seeing the packages before eating, but Rory wasn’t. So the kids and I set up an eating order of little towers of KitKats, hiding the packages, and then calling Rory in. We then went through them, eating one flavor at a time, giving our individual and group assessment.

All in all, it was an incredibly fun flavor adventure and there are plenty of the flavors I would eat again in a heartbeat. But there were a few that were “meh” for me, a stronger “meh” for Rory, and extremely distasteful to my daughter (though, strangely, my son really liked them).

Because we didn’t (and still don’t) know the actual flavors of some of these, please excuse my labeling of them, but I had to come up with some kind of descriptor for each one for tallying and planning purposes. 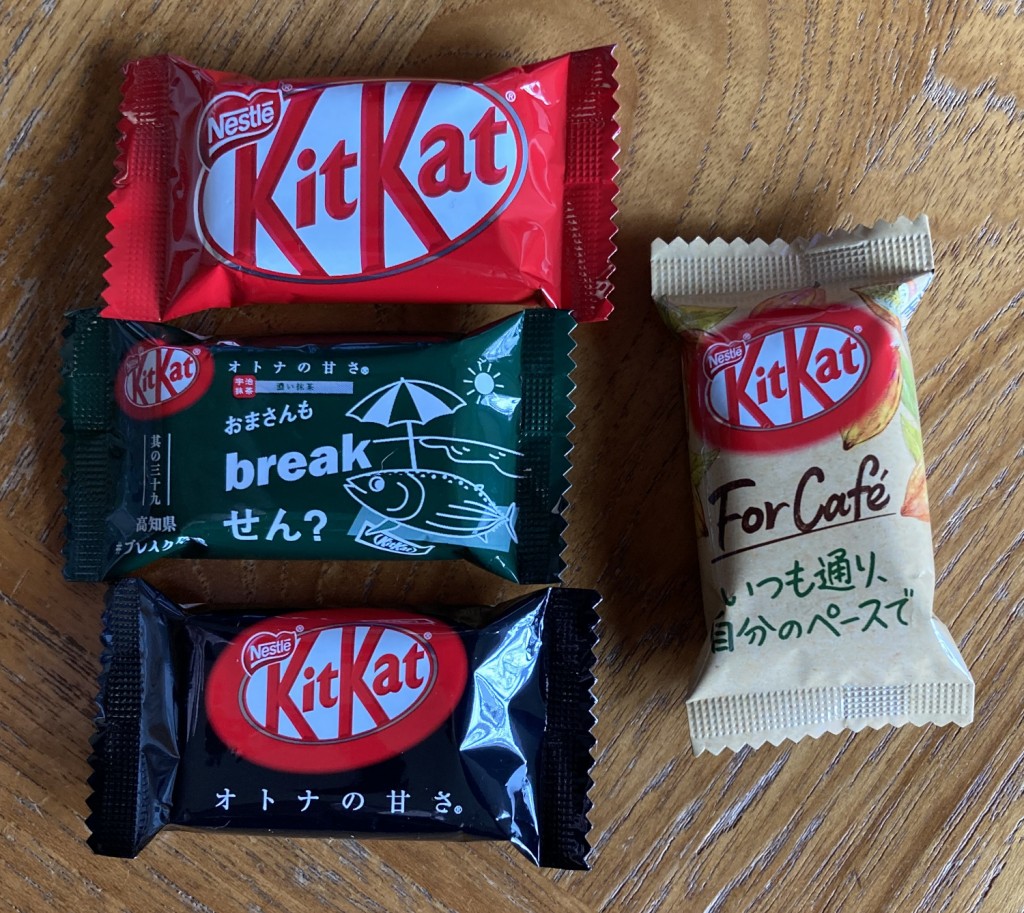 This was a fun sitting. Interesting, though not entirely delicious. (Because matcha.) 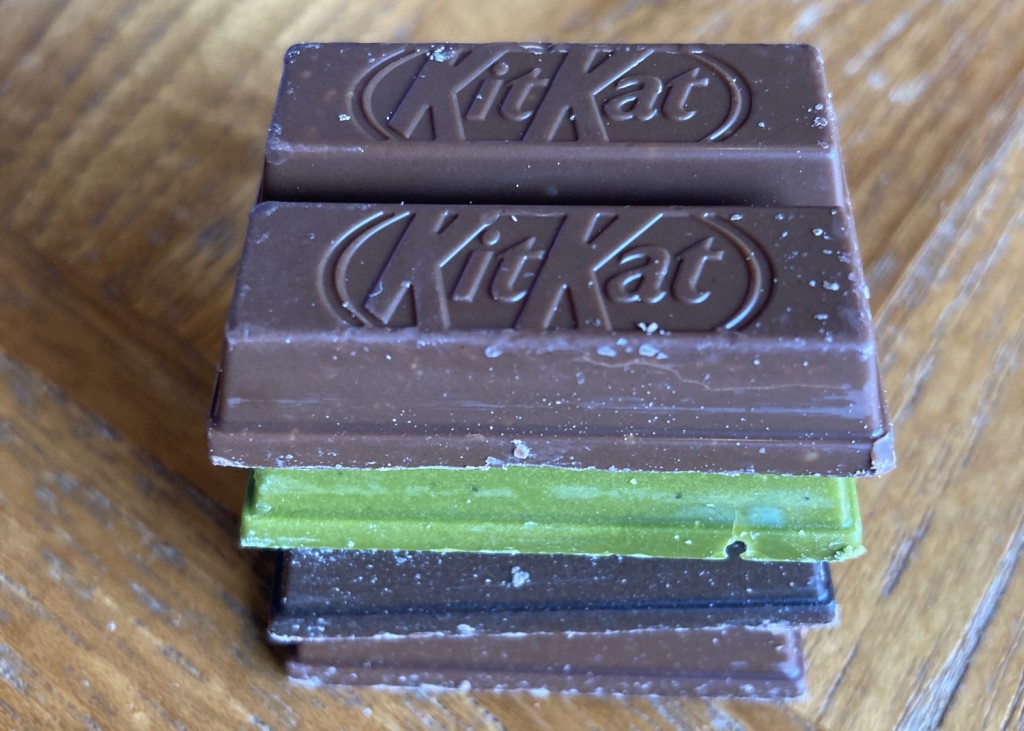 Me: Tastes like milk chocolate. Smooth. 9/10.
Rory: Slight fruity, malt flavor. But milky is a better word for it. A light sweetness. Would rather have the regular U.S. version.
Daughter: Might have malt?
Son: Really yummy, maybe malt. 9/10. 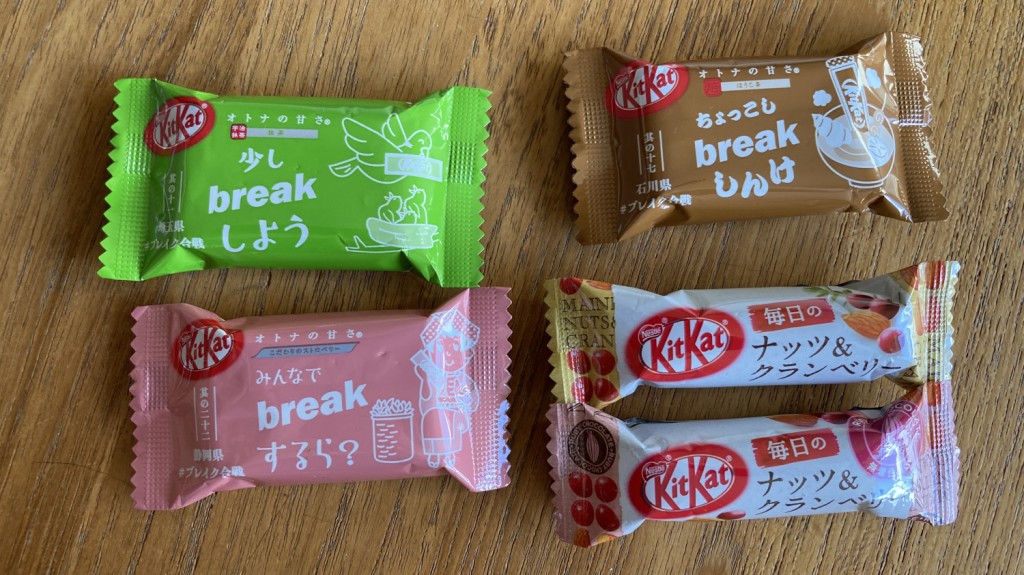 Me: Tasted yummy. Chocolate with stuff.
Rory: Vague on what was inside.
Daughter: I like it.
Son: Like normal KitKat but fruitier. 9/10.

We averaged a thumbs up if you like stuff in stuff.

Me: Pink. Tangy. Ruby chocolate. (I really liked it.)
Rory: Cranberry comes through really well.
Daughter: Like it a little better than the last one. More flavorful.
Son: 9.5/10.

Me: Bright, tart, nice flavor. Kind of an artificial flavor.
Rory: Cherry? I like it.
Daughter: Tastes like something from IKEA.
Son: 10/10.

We all enjoyed that one. 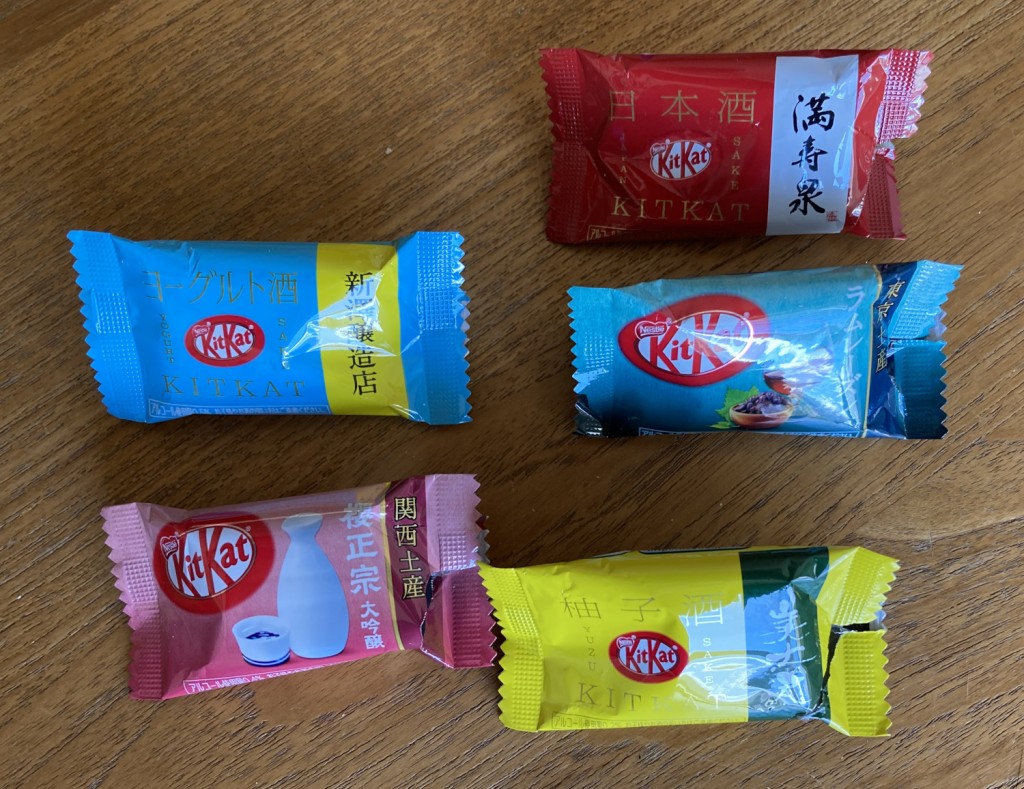 I apologize, I forgot to take a photo of these before we opened them, so the package photos are a little less than ideal. This sitting was our least favorite overall. Other than my son…

As you can see, we were divided on that one.

I think this one put my daughter off more than her description conveyed.

This one I called “raisins” because one of the words on the package translated to “raisins”, in fact the only word on any of the “what the heck is this” packages that translated to anything resembling food. I have no idea, still, whether it was raisin flavored.

Me: I like it, definitely has an alcohol taste. (I don’t love the flavor of alcohol but have always loved things like rum raisin ice cream.)
Rory: Eat-able.
Daughter: It was okay, but didn’t love it.
Son: 11/10. 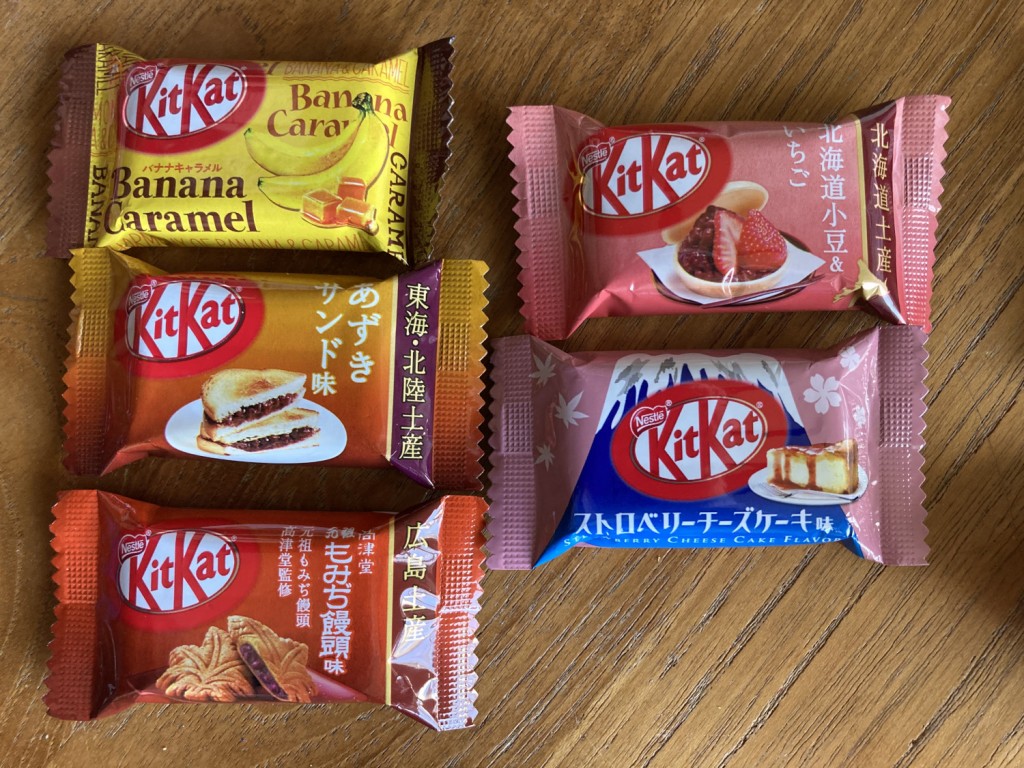 This was the flavor that we only had one of, and was strangely sitting all by itself outside of the main box. My guess is that the seller realized that there were only actually 17 flavors in the box, and included one of a different flavor to fill out the 18. In any case, I appreciated the attention to detail.

Me: Tastes like banana chocolate. (I liked it.)
Rory: Chocolate chip banana bread.
Daughter: About what I expected.
Son: Very banana-y. 6/10.

“Strawberry in a Shell”

Me: Tastes like white American cheese.
Rory: Thought it was going to be flan. But strawberry cheesecake does make sense.
Daughter: Not as good as I was hoping.
Son: 8/10 maybe.

So, there you have it. Our nerdy family’s assessment of many different flavors of KitKat. There are some we would get again in a heartbeat (though which flavors we’d want seems to differ greatly by person), but there were a few “meh” ones that none of us would go out of our way to try again. We all really liked the ruby chocolate, and liked the ones that were similar to the KitKats we are already familiar with. The other, more unusual flavors, though, were liked by some and not by others.

Would I recommend this experience to others? Definitely. If you love KitKats in general, and enjoy a good flavor adventure, then I do recommend it. But I do suggest that you take your time with it, doing one flavor at a time, and comparing opinions with at least one other person. You may find that you disagree in totally unexpected places!