because I said I would. 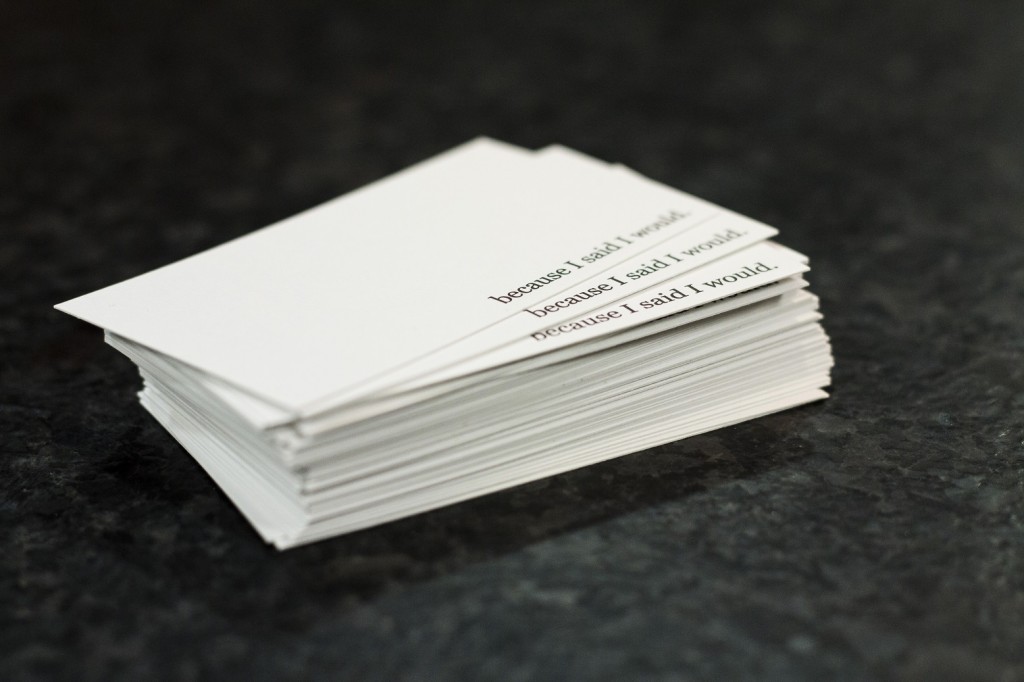 The cards. Image: because I said I would.

Thanks to one of our GeekMoms (thanks, Judy!), I learned about a new project called because I said I would. It started as a better option than a New Year’s resolution. Those are often broken. But if you want to keep a promise, to yourself or to someone else, keeping that promise “because you said you would” is important.

As a way to do this, the because I said I would. folks created business card-sized cards on which you write your promise. If you promise yourself something, put the card where you’ll see it. In your wallet, at your desk, or on your bathroom mirror. If you promise it to someone else, give them the card. They can give it back when you’ve fulfilled it.

Because I said I would is a social movement and nonprofit organization dedicated to bettering humanity through the power of a promise. To encourage positive change and acts of kindness, we send “promise cards” to anywhere in the world at no cost. People use these cards to remember the importance of their word, for promises both big and small. We have sent over 150,000 promise cards to over 48 different countries by request only.

I thought this was an awesome enough idea to do more than just get the 10ish free cards. I ordered 100, and paid much less than I would have for that many business cards. I wanted to encourage myself, Rory, and the kids to make and keep promises. So the cards are sitting on my desk, waiting for us to be ready to make promises.

Keeping promises is something that doesn’t seem to be valued enough anymore in our society. Telling people you’ll do something, or be somewhere, or finish something is easily said, but not as easily achieved. Too many people these days don’t value their own word, or the word of others. I like people to know that they can count on me, and that when I say I’ll do something, I’ll do it. I believe it should be that way for others.

In addition to cards, the folks at the because I said I would. website sell Tshirts, bracelets, card cases, and notebooks. They also accept donations. But if you aren’t ready to commit financially, send away for the free cards.

What would you put on your card?