Some Kind of Anti-Bullying Day 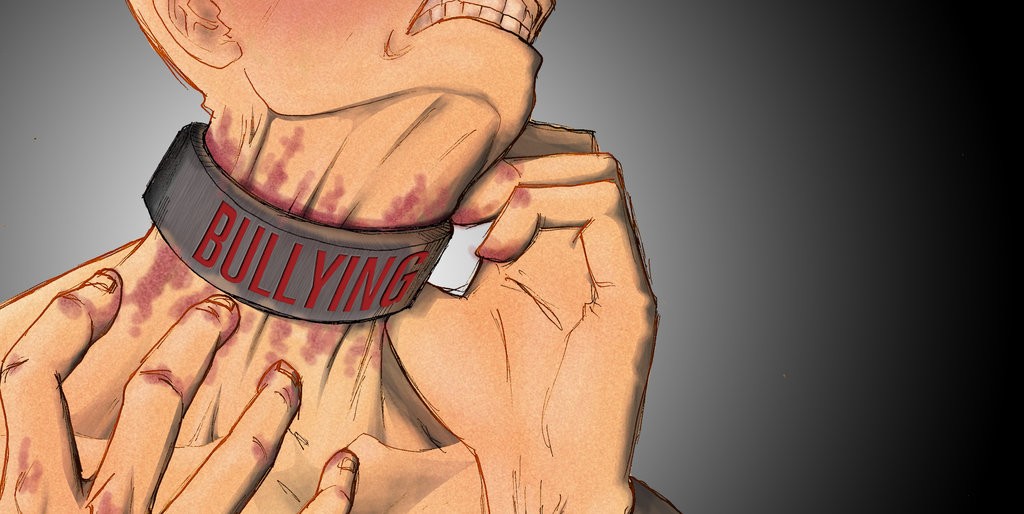 Bullying, by Rennan Aiko on deviantART (CC BY 3.0)

It seems like every single day is a National Day of <fill in the blank> these days. Some are pretty stupid, and all are a thinly veiled attempt to raise awareness for something and get people talking. This is a good thing for some issues, if we look past the contrived nature of it all.

Recently there was a day that was some kind of anti-bullying day. This one is pretty near and dear to my heart. As many geeks are, I was relentlessly bullied in school. Starting in the third grade (naturally, after I got glasses and a bad short haircut), people started being really mean to me. One girl thought I might be a boy, and asked me, “Are you a boy or a girl?”

After that, it was mostly boys who teased me, which didn’t hurt any less. They would laugh at me for being smart and getting good grades. They would ask me if I was missing a tooth (I used to have a huge space between my front teeth—the size of a tooth). They would make comments about me being awkward. But mostly they would tease me about my hair.

A few of the boys teased me on a regular basis. Never together as a group, always individually. I’ve blocked out most of the specific things they’d say, but my hair being big and poofy, and looking like an afro, was the general target (when your hair is as curly as mine is, what else do you do with it when it’s short but you’re trying to grow it out and you’re a kid and it’s the 1980s and you have no style sense?). One boy (who I just Googled and it is possible that he is a negatively controversial CEO of some kind of financial company… hm…) used to sing, “She’s got the whole world, in her hair” regularly. He was also very creative with his insults, and said new bad things to me almost every day.

When you’re 10 or 11, and take everything to heart, it is humiliating. I tried to ignore him, but it was all I could do to not cry in class. That would have made the teasing worse, of course.

Kids are so cruel sometimes. As an adult, I can make myself feel better with the fact that kids who bully other kids have it bad at home, or are trying to compensate for their own shortcomings, or something. But at the time, I dreaded going to school. My mom didn’t know the extent of the teasing, and I doubt my teachers did either. I wasn’t trying to hide it from them, but it never occurred to me to tell anyone. Or even ask the bullies to stop. I was a pretty clueless kid in a lot of ways.

As I got older, I got a bit more sure of myself, but only ever so slightly. So when junior high hit, I still had hair problems, weird teeth, and glasses. But this time I got comments from girls about me never wearing clothes that were in style. This was 1985. Again, it was humiliating. My mom did her best to take me shopping for some “in style” clothes, but we weren’t experts in it. In the end, no one teased me about my clothes after that, but the looks and comments I got throughout junior high, from both girls and boys, made it clear that I was different, and not in a good way (according to them).

High school was much better. I was finally around the middle of the social ladder because I went to a science and technology high school. Everyone was smart, so that was one item that didn’t matter anymore. Half the people wore glasses. There goes another item. I got braces and my teeth moved into place. Okay. So that just left my hair and general awkwardness. No one bullied me in high school, but it was made clear that I was not anywhere near the top of the social ladder. Still, I had plenty of friends, and enough dates, that I felt much more welcome there. I even dated one relatively popular guy at one point. I give him a lot of credit for dating me even though his friends gave him crap about it. Still, he broke up with me a few weeks later, but it’s okay. I understand the position he was put in.

In college nothing mattered, and as an adult I’ve stopped caring what people who don’t matter think of me, especially since I’ve had kids. But still to this day, the scars from those early traumas linger, and self-doubt and a poor self-image often speak louder than I’d like them to.

Bullies suck. They hurt people long term. But they themselves also need help. The reasons why they bully others may have nothing to do with what kind of person they are, and everything to do with their own environment. But unfortunately they don’t usually get help, and the bullying cycle goes on and on.

Why can’t we all just get along?

Previous Post
Through the Decades: My Life in Chapters
Next Post
Keeping Anxiety From Holding Me Back