Jane Austen Mad Libs*. Because why not. If I run out of other ideas, I may make this a semi-regular feature, at least making it through her six major works. And maybe some other public domain works. Let me know if you have any requests! 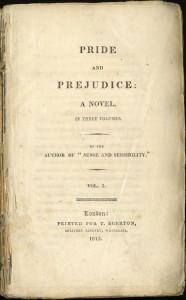 Pride and Prejudice title page. Image is in the public domain.

However little  (verb)  the feelings or views of such a man may be on his first  (verb)  a neighbourhood, this truth is so well  (verb)  in the minds of the  (adjective)  families, that he is considered the rightful  (noun)  of some one or other of their daughters.

This was invitation enough.

More from Pride and Prejudice

“Miss Bennet,” replied her ladyship, in an  (adjective)  tone, “you ought to know, that I am not to be  (verb)  with. But however insincere you may  (verb)  to be, you shall not find me so. My  (noun)  has ever been celebrated for its  (adjective)  and  (adjective) , and in a cause of such moment as this, I shall certainly not  (verb)  from it. A  (noun)  of a most  (adjective)  nature reached me  (number)  days ago. I was told that not only your  (noun)  was on the point of being most  (adverb)  married, but that you, that Miss Elizabeth Bennet, would, in all likelihood, be soon afterwards united to my  (noun) , my own  (same noun) , Mr. Darcy. Though I know it must be a scandalous  (noun) , though I would not  (verb)  him so much as to suppose the truth of it possible, I instantly resolved on setting off for this place, that I might make my  (plural noun)  known to you.”

“If you believed it impossible to be true,” said Elizabeth, colouring with  (emotion)  and disdain, “I wonder you took the trouble of coming so far. What could your ladyship propose by it?”

“At once to insist upon having such a  (noun)  universally contradicted.”

“Your coming to  (location) , to see me and my family,” said Elizabeth coolly, “will be rather a confirmation of it; if, indeed, such a  (noun)  is in existence.

Jane Austen Mad Libs*. Because why not. This was a very popular post last time
If the caption says so, it is Copyright: Jenny Bristol.