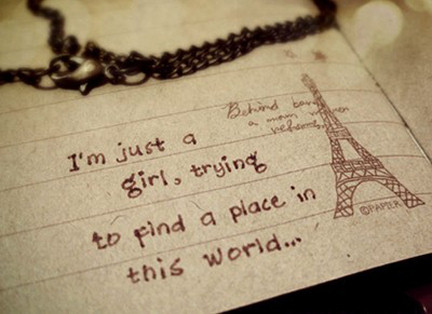 I can’t be the only female who feels this way. Bear in mind that I’m very much a cis female, heterosexual, in a committed relationship with a man. And yet I don’t feel a camaraderie with women. I am much more comfortable hanging out with men. Except when I’m not. Sure, occasionally a woman will say something about women and I’m like, “Hell yeah. You nailed it on the head.” But most of the time I’m left confused. I feel like there is a club that I qualify for but wasn’t issued a membership card. I just sit on the sidelines, watching. Not wishing to be invited, but also not knowing where else to go.

I was never one of those girls (or even young women) who planned and envisioned their wedding day before it was a possibility. Though I do like to occasionally dress up, in skirts and everything, most days I much prefer to be wearing comfortable clothes and sensible shoes.

I’ve always been this way. I preferred LEGO to Barbies, computers to makeup. I wasn’t a tomboy, so growing up I didn’t ever quite fit in with boys either. I’m something in the middle, I guess. I haven’t ever found a gender-based group of people where I fit in. Generally, that’s okay. It’s not necessary. But sometimes you feel the lack.

When I was a kid, I was a "girl." That's the word that described who
If the caption says so, it is Copyright: Jenny Bristol.